A new exhibition, From Volcanoes We Sailed: Connecting Aeolian Generations, will be opening Friday, 19 August at Five Dock Library.

Nestled in the cradle of the Tyrrhenian Sea between Naples and Sicily, the Aeolian islands of Lipari, Vulcano, Salina, Stromboli, Panarea, Filicudi and Alicudi were forged by the clashing of tectonic plates.

Ongoing seismic activity and the decimation of Malvasia vineyards lead to a mass migration in the early 20th century to countries like Australia, where today some of these families span four generations.

“In sharing our family history with the wider community, we ensure that the link to our Aeolian heritage is passed on,” says Fausto Biviano, Vice President of the Associazione Isole Eolie AIE (Association of the Aeolian Islands).

Known in Sydney for their Italian fruit shops, Aeolians established a vast number of independent businesses in their newly adopted home – some becoming household names such as Mezzapica Cakes and Gelato and the Mediterranean House reception venue.

They have also become leaders in the community with prominent Aeolian figures including co-founder of AIE and former councillor and Mayor of Drummoyne, the late Rossario (Ross) Maniaci.

By 1921, Aeolians were the largest regional group to become naturalized Australians and by the 1950s the community swelled to 30,000.

With a desire to support newly arrived relatives, the first regional Italian society, the Circolo Isole Eolie was founded in 1903 and operated until WWII. Reborn in 1971, the Associazione Isole Eolie continues to host events focused on culture, food, and family.

From the 1950s, many Aeolians who disembarked in Sydney set up homes and families in the City of Canada Bay and surrounds.

In 1997, the City of Canada Bay Council and the Municipality of Lipari, representing the Aeolian archipelago, formalised a Sister City partnership to foster cultural and educational links. To celebrate 25 years of this relationship, a monument was erected in Piazza Eolie at Fred Kelly Place in 2013.

“We have an incredible history. We were adventurers of the high seas and our community has been integral in shaping Italo-Australian culture as we know it,” says Cristina Neri, author and curator.

This exhibition is supported by the City of Canada Bay and will also be on display at the FerraCinema stage during Ferragosto. 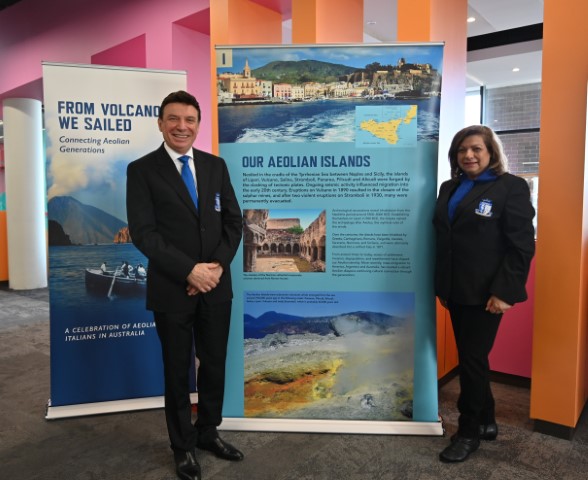